Update – 22 December 2019 – SOLVED. I have found that it’s now possible to reset my password, so Twitter may have rolled out a corrective to whatever glitch was preventing it (was a known problem according to TwitterHelp’s Tweets).

Recently Twitter emailed me (and loads of other people) to say that we were in danger of losing access to old accounts (for me it was @DiabetesTrials) and mine would be closed if I didn’t log in. I used to work at Diabetes UK years ago and set it up so that any new clinical trial relating to diabetes that was added to one of the main trials databases would show up on that account. I don’t particularly need it, but it is mine.

I cannot get past the reset password screen which seems to send me (and judging from the tweets everyone else too) into an infinite loop of (1) requesting a password-reset link to your email account and (2) when you click on it the page says your password has already been reset. It hasn’t! It’s starting to drive me a little mad. 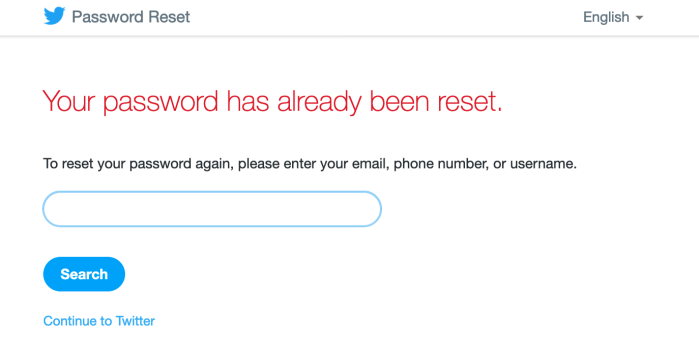 I’ve tried everything I can think of including repeating the process multiple times. I even downloaded a completely new browser (Chrome) and tried it there, nope. I also told it I didn’t have access to the email address it suggested and created a new one, but it sent me an email telling me it didn’t recognise the address I’d used and suggested that someone else trying to hack their way in 😉

Twitter is full of Tweeted distress from others experiencing the same problem and there has not been a peep from any of the assistance accounts offering advice or even an acknowledgement that there’s a problem here. Presumably there will be people who only have the one account and if they can’t access it at the moment they won’t be able to Tweet about how annoying that is.

Re: Twitter’s move to free up dormant accounts – people were worried when this was newly announced as it seemed that the accounts would just be wiped and the handles made available to anyone else wanting them. A lot of people expressed concern that the accounts of people who’d died would become available for others to use – a potentially rather distressing state of affairs. Twitter has walked this back a little after the backlash and is looking at ways of memorialising accounts where someone has died.

Twitter had never made much of the option to redistribute accounts before, though one of the most commonly asked questions is ‘how can I get hold of the handle used by a now-dormant account?’ and until recently it was pretty much ‘never’. Oh well, at the moment no-one can get access to DiabetesTrials it seems, unless they know my password.

I see a lot of the same queries about Twitter crop up frequently on the #TwitterHelp hashtag, most of which have already been answered on Twitter’s own help site.

For example how to change your city for Twitter trends | uploading a video | finding out why your tweets are missing, or aren’t showing in search | how to unlock or recover a suspended account (where this is possible) … and so on

If you’re looking for an answer to a particular Twitter-related query or are trying to troubleshoot something then this post should point you in some helpful directions.

1. Searching on Google and other search engines
If I know a solution or have some suggestions I’ll try and answer. If I need to check something first I usually type in some relevant search terms, the word Twitter and occasionally site:help.twitter.com into my preferred search engine (it’s Google). That last one searches for mentions of whatever I’m trying to find in Twitter’s help files. If I omit that then the search will cover any website (including this one) as lots of people write ‘how to’ blog posts about Twitter.

3. Searching Quora
You can visit Quora itself and search there or just add Quora to search engine searches, for example https://www.google.co.uk/search?q=site:quora.com+twitter+video

5. All the other pages you can play with on Twitter

Found by searching for site:*.twitter.com on Google

When I’m logged in to Echofon for iPhone I can see tweets that I’ve sent, or from people I follow or tweets that people have sent to me – and it lets me send tweets too. This means that Echofon must be able to ‘read’ my tweets, including DMs and be able to send on my behalf. When you sign up to use an app it lets you know that it’ll be able to read and send tweets and some people are a bit puzzled by the language, but that’s all it means. It’s rarely sinister.

But sometimes something goes a bit wrong and a rogue app starts sending tweets or DMs on your behalf, or changes your links so that they go to an affiliate page. Or something else might happen that makes you feel your Twitter account isn’t under your control. Here are some ideas for fixing it. Generally you’d need to use the desktop ‘twitter.com’ on a web browser to fix most of these, I’m not sure how good the mobile apps are.

See Twitter’s helpfile: My account has been compromised for more information.

Unauthorise rogue apps
Log in to desktop Twitter and visit your Settings > Applications page where you can see all of the apps you’ve authorised. Pick any that look a bit iffy and revoke them.

It’s recommended that if you need to de-authorise an app you should change your password too.

Examples of some generally annoying apps
You may have signed up to services like commun.it or SumAll etc to help manage your Twitter account. Note that these often send tweets on your behalf thanking people for engaging or following or retweeting. Many people find these services exceptionally irritating and may unfollow or block you if you send these tweets so it’s best to switch that functionality off, even if you want to keep the service active for finding out about new people to follow etc. Spamming strangers or your followers is a terrible idea.

How did this app tweeting on my behalf happen?
It may be that you clicked on a link in a tweet which took you to a page that looked suspiciously like a log in page for Twitter. By entering your password you’ve given access to your Twitter account to someone else. If your password is very easy to guess then that won’t help either. It could just be that it’s a genuine app but just happens to be a bit spammy.

What else can tweet on my behalf?
If you have a blog you might link it to your social media accounts so that each new post is automatically sent to your Twitter feed, Facebook etc. I don’t have that for this particular blog but do for several others, and it works fine, as long as I’m in charge of the blog. If someone hacks my blog, guesses my password (or if someone who shares the work blog with me gets hacked) then it’s possible that someone could send a tweet via my blog. To be honest I don’t think it happens very often but I’m just exploring the possibilities.

If you can’t find the source of the error in your Applications then it may be an account on a service elsewhere that you’ve linked to Twitter which is causing the problem.

Popular posts on this blog

This is a hobby so I may not be able to answer every query! Twitter always quicker.
Follow How to do various techy things on WordPress.com