This is my answer to the above question on Quora (question title shortened a bit for this post).

Probably not, but not definitely not – it depends. The unluckiest scenario for a mis-liked tweet would be the person having their notifications tab open, looking at it and clicking to see it update with your like which later disappears – but that’s pretty unlikely. As [anoter respondent] says it’s more likely that they’d get a notification of the like but when they click to see what it was nothing would show up.

Email notifications
Another possibility would be that the like is included in the digest email sent out to people who have notifications emailed to them, I don’t think this includes absolutely every type of interaction though and a like that is quickly unliked might not be captured, but I suppose it’s possible. (See ‘Activity related to you or your tweets’ on this page How to update your email preferences).

Web notifications
A more likely situation would be if they have Web Notifications switched on, which sends a little floating pop up to inform (or annoy) you that someone’s done something to one of your tweets. It’s possible, but not certain, that a like would be flagged up in this way but Twitter indicates that it doesn’t alert you to every single action performed on your tweets so it may decide a like can be ignored, more info at How to enable web and browser notifications

I’ve temporarily switched on web notifications to take this screen shot to illustrate that you can opt in to receive likes (but I don’t know if it reports every like). So someone might be looking in another tab and still be notified that you’ve liked their tweet…

By the way the options are ‘Tailored for you’ or ‘By anyone’ so I suppose the anyone one is more likely to flag up your brief like. 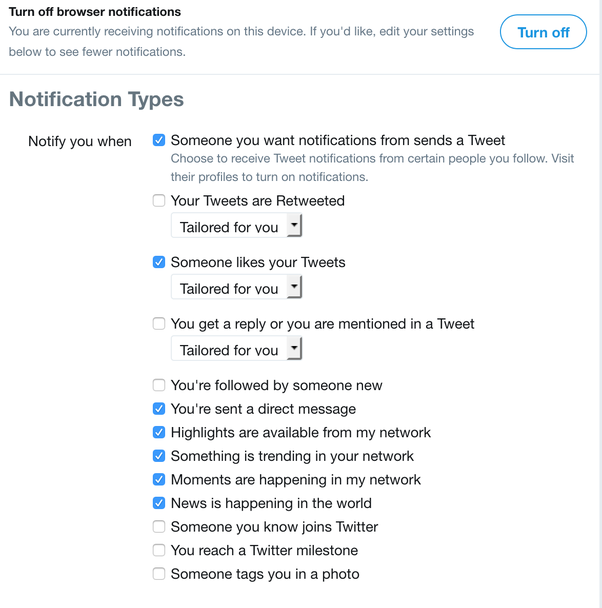 This site uses Akismet to reduce spam. Learn how your comment data is processed.

If you’ve found this useful, please make a donation to a Food Bank – here’s one

Popular posts on this blog

This is a hobby so I may not be able to answer every query! Twitter always quicker.
Follow How to do various techy things on WordPress.com